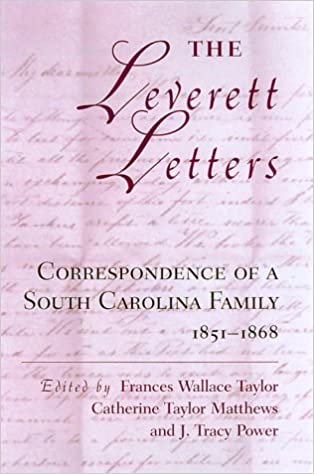 "It will be an extreme disadvantage to you all your life, not to be able to make easy use of your pen," Mary Maxcy Leverett lectured one of her sons on the art of letter writing in May 1863. Adopting her keen interest in lively, well-written correspondence, Mary's nine children wrote home frequently as they ventured from their South Carolina plantation to college, postgraduate study, travel in Europe, and service in the Confederate army. Little did they realize that these letters, which served as a vital means of communication within the family, would offer a window into the world of the southern planter class for readers almost a century and a half later. As compelling as fiction, the 230 letters collected in this volume paint a vivid, very personal portrait of southern life from the late antebellum era through Reconstruction.

Mary and her husband, Charles Leverett, an Episcopal clergyman and low-country planter, raised five girls and four boys in Beaufort District near McPhersonville and in Richland District just outside Columbia. The family's correspondence, often written in a consciously literary style, describes the mundane and the extraordinary with equal vitality. Revealing intimate perspectives on the war from the battlefield and home front, the letters recount everyday sacrifices and landmark events, including the death of the commanding officer at Fort Sumter and the burning of Columbia. In addition, they provide insight into the importance of education, the challenges of funding a large household, and the interactions between black and white for a family in many ways representative of the slaveholding planter class.

Unlike most collections of Civil War letters, the Leverett correspondence is remarkable for its inclusion of letters written before and after the conflict. The thirty-nine antebellum and twenty-six postwar letters provide the context and resolution often lost in editions restricted to wartime letters.


Frances Wallace Taylor received A.B. and M.A. degrees from the University of South Carolina. A native South Carolinian, she began transcribing the letters of her ancestors that are gathered in this collection in 1962.

Catherine Taylor Matthews received B.S. and M.S. degrees from the University of South Carolina. For almost two decades she has pursued an interest in historical research and the historical correspondence of her ancestors.

J. Tracy Power holds a Ph.D. from the University of South Carolina and is a historian with the South Carolina Department of Archives and History. He is the author of Lee's Miserables: Life in the Army of Northern Virginia from the Wilderness to Appomattox.