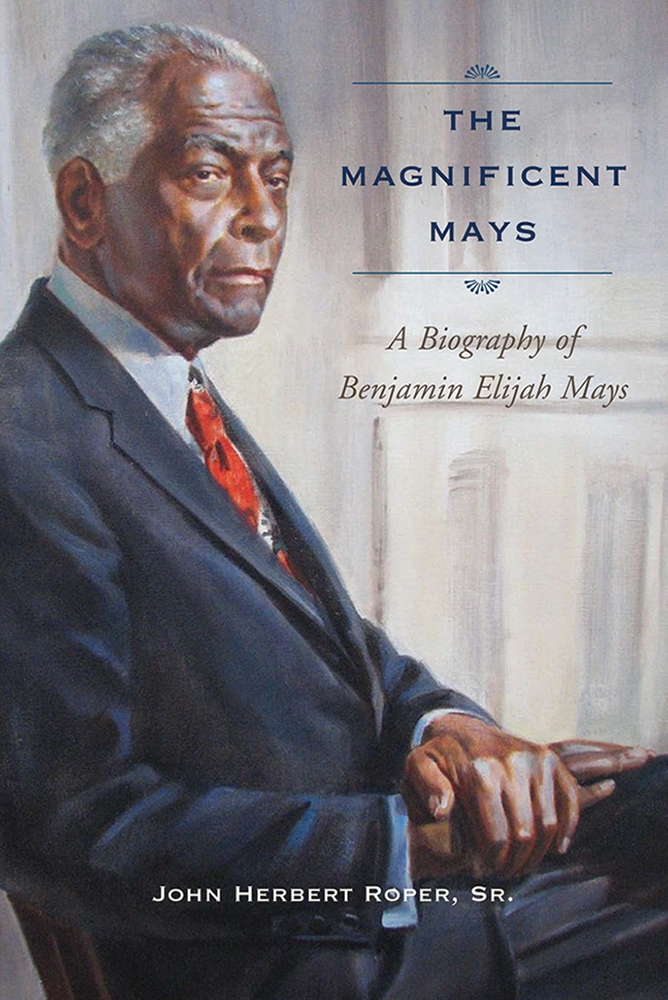 A Biography of Benjamin Elijah Mays

Civil rights activist, writer, theologian, preacher, and educator, Benjamin Elijah Mays (1894-1984) was one of the most distinguished South Carolinians of the twentieth century. He influenced the lives of generations of students as a dean and professor of religion at Howard University and as longtime president of Morehouse College in Atlanta. In addition to his personal achievements, Mays was also a mentor and teacher to Julian Bond, founder of the Student Nonviolent Coordinating Committee; future Atlanta mayor Maynard Jackson; writer, preacher, and theologian Howard Washington Thurman; and the Reverend Martin Luther King, Jr. In this comprehensive biography of Mays, John Herbert Roper, Sr., chronicles the harsh realities of Mays's early life and career in the segregated South and crafts an inspirational, compelling portrait of one of the most influential African American intellectuals in modern history.

Born at the turn of the century in rural Edgefield County, South Carolina, Mays was the youngest son of former slaves turned tenant farmers. At just four years of age, he experienced the brutal injustice of the Jim Crow era when he witnessed the bloody 1898 Phoenix Riot, sparked by black citizens' attempts to exercise their voting rights.

In the early 1930s Mays discovered the teachings of Mohandas Gandhi and traveled to India in 1938 to confer with him about his methods of nonviolent protest. An honoree of the South Carolina Hall of Fame and recipient of forty-nine honorary degrees, Mays strived tirelessly against racial prejudices and social injustices throughout his career. In addition to his contributions to education and theology, Mays also worked with the National Urban League to improve housing, employment, and health conditions for African Americans, and he played a major role in the integration of the Young Men's Christian Association (YMCA).

With honest appreciation and fervent admiration for Mays's many accomplishments and lasting legacy, Roper deftly captures the heart and passion of his subject, his lifelong quest for social equality, and his unwavering faith in the potential for good in the American people.


John Herbert Roper Sr., is the Richardson Professor of American History at Emory & Henry College in Emory, Virginia. He is the author of five volumes of southern history, including the biographies C. Vann Woodward, Southerner and U. B. Phillips: A Southern Mind.

"It is Roper's steady development of character and intellectual breadth that is most engaging and instructive."—Georgia Library Quarterly

"Roper's biography of one of the important Americans of the 20th century is an important contribution to U.S. History. Immediate and accessible, the life of Benjamin E. Mays reveals his firsthand experiences with racial prejudice: the violence of the Phoenix race riots, where whites came close to murdering the four-year old Mays, the continuing hard-core southern racism, and the more nuanced racism in the North, less violent but nevertheless cutting deep. Roper illuminates how Mays struggled to come to understand the humanity of his oppressors and become the spiritual godfather of Martin Luther King, Jr., and the Civil Rights Movement. Mays had a life of great import because of his life-time determination to fight racism and his patience in preparing himself with the education and experience necessary to address it. Roper skillfully evokes the complexity, tension, and contingence of the black experience within the political and cultural context of the times. This thoughtful and substantial narrative is so compelling the reader does not want to put the book down."—Orville Vernon Burton, author of The Age of Lincoln and President of The Southern Historical Association

"From a rambling South Carolina crossroads to the heights of power, Benjamin Elijah Mays defied astonishing odds as he distinguished himself as a public intellectual, college educator, and social activist. With captivating detail, Magnificent Mays chronicles the life journey of one of the most eloquent and prophetic minds of the twentieth century. This work stands as a moving tribute to a resolute champion of the modern Civil Rights Movement."—Bobby Donaldson, Associate Professor of History and African American Studies, University of South Carolina