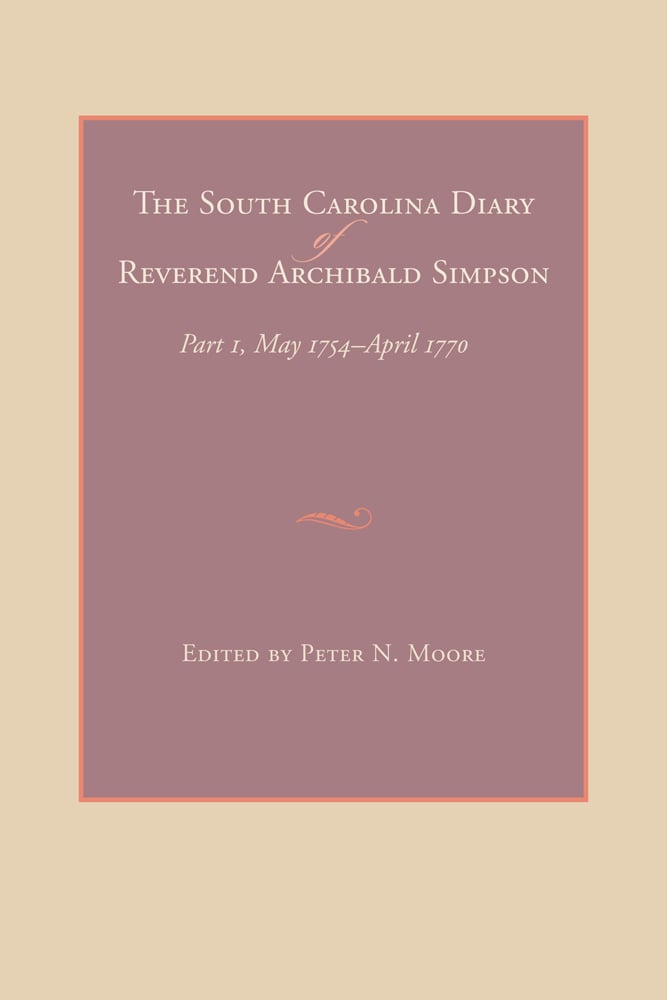 The South Carolina Diary of Reverend Archibald Simpson, edited by Peter N. Moore, is a two-volume annotated edition of selections from the journals of a noted eighteenth-century lowcountry Presbyterian pastor and planter. Simpson's manuscript journals, consisting of approximately two thousand eight-hundred pages of text, span from youthful entries in 1748 until 1784, and chronicle the religious, social, and cultural milieu of Scotland and colonial America during the revolutionary era. Preserved since 1854 by the Charleston Library Society, Simpson's firsthand accounts, augmented here with Moore's introduction and annotations, offer an insider's vantage point on this transformative period in colonial southern history.

Born in Glasgow, Scotland, around 1734, Simpson appeared in South Carolina in 1754 and was a Presbyterian pastor in the lowcountry for almost two decades before returning to Great Britain in 1772. A meticulous and detailed writer, Simpson filled his journals with geographical information, local history, and commentaries on his South Carolina community and its inhabitants.

Part 1 includes selections from Simpson's journals from 1754 through 1770. Moore's introduction provides an account of Simpson's experiences in colonial South Carolina, religious meditations, and observations on his personal spiritual failings and local evangelical pastors. Simpson also remarked on larger issues of the colonial period, including the revolutionary sentiment in America and the imperial crisis of Great Britain.


Peter N. Moore is the Joe B. Frantz Associate Professor of History at Texas A&M University Corpus Christi. Moore received the George C. Rogers Jr. Award for the best book in South Carolina history in 2007 for World of Toil and Strife: Community Transformation in Backcountry South Carolina, 1750–1805, and he was a finalist for the C. Vann Woodward Award for Best Dissertation in Southern History.