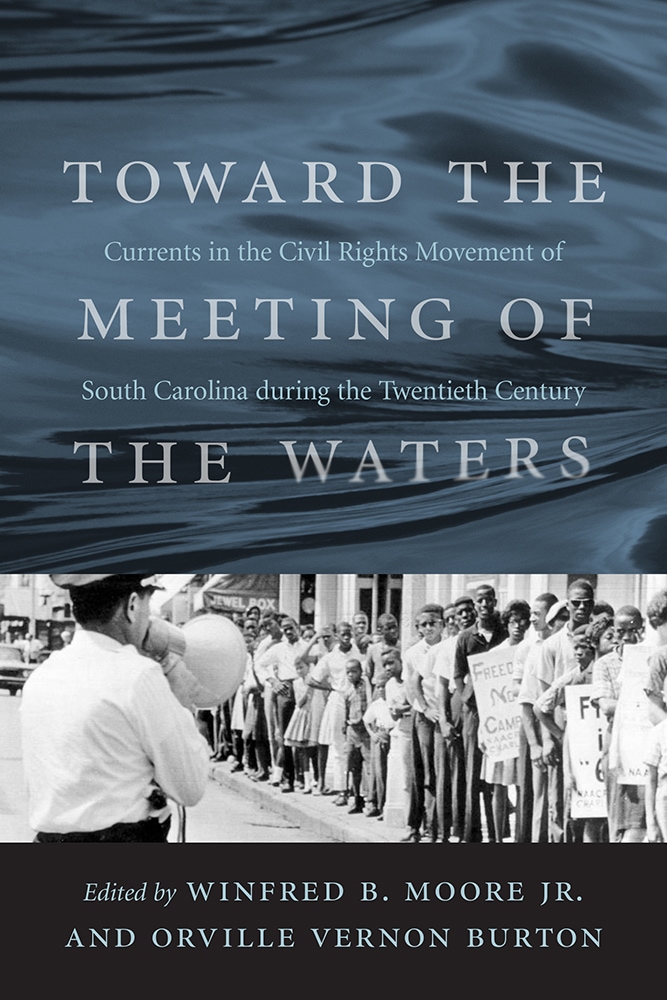 Toward the Meeting of the Waters

edited by Winfred B. Moore, Jr. and Orville Vernon Burton

2009 Choice Outstanding Academic Title • A provocative look into civil rights progress in the Palmetto State from activists, statesmen, and historians

Toward the Meeting of the Waters represents a watershed moment in civil rights history—bringing together voices of leading historians alongside recollections from central participants to provide the first comprehensive history of the civil rights movement as experienced by black and white South Carolinians. Edited by Winfred B. Moore Jr. and Orville Vernon Burton, this work originated with a highly publicized landmark conference on civil rights held at the Citadel in Charleston.

The volume opens with an assessment of the transition of South Carolina leaders from defiance to moderate enforcement of federally mandated integration and includes commentary by former governor and U.S. senator Ernest F. Hollings and former governor John C. West. Subsequent chapters recall defining moments of white-on-black violence and aggression to set the context for understanding the efforts of reformers such as Levi G. Byrd and Septima Poinsette Clark and for interpreting key episodes of white resistance. Emerging from these essays is arresting evidence that, although South Carolina did not experience as much violence as many other southern states, the civil rights movement here was more fiercely embattled than previously acknowledged.

The section of retrospectives serves as an oral history of the era as it was experienced by a mixture of locally and nationally recognized participants, including historians such as John Hope Franklin and Tony Badger as well as civil rights activists Joseph A. De Laine Jr., Beatrice Brown Rivers, Charles McDew, Constance Curry, Matthew J. Perry Jr., Harvey B. Gantt, and Cleveland Sellers Jr. The volume concludes with essays by historians Gavin Wright, Dan Carter, and Charles Joyner, who bring this story to the present day and examine the legacy of the civil rights movement in South Carolina from a modern perspective.

Toward the Meeting of the Waters also includes thirty-seven photographs from the period, most of them by Cecil Williams and many published here for the first time.


Winfred B. Moore Jr. is a professor of history and dean of humanities and social sciences at the Citadel in Charleston, South Carolina.

"This lively collection of scholarly and anecdotal presentations is an essential addition to the library of anyone interested in one of the greatest civil battles of our time. It will shatter all superficial assumptions that little was done during the early part of the last century. Most importantly, it establishes unequivocally the critical role South Carolina played in the tragedies, dramas, and hard-fought victories of this age."—Charleston (S.C.) Post & Courier

"Amid the riveting first-person accounts and intriguing historical themes, something transformative occurs . . . in [this] immensely moving book.""—Columbia (S.C.) State

"Organized chronologically, the book gives a powerful description of . . . repression, redemption, and survival in a southern state in the era of Jim Crow. Add on contributions from Dan Carter, Jack Bass, and Cleveland Sellers, and the reader has that rarest of works-an anthology that sticks to a theme with coherence. There is no better place to begin a study of South Carolina politics, or southern history, for that matter. An outstanding work."—Choice