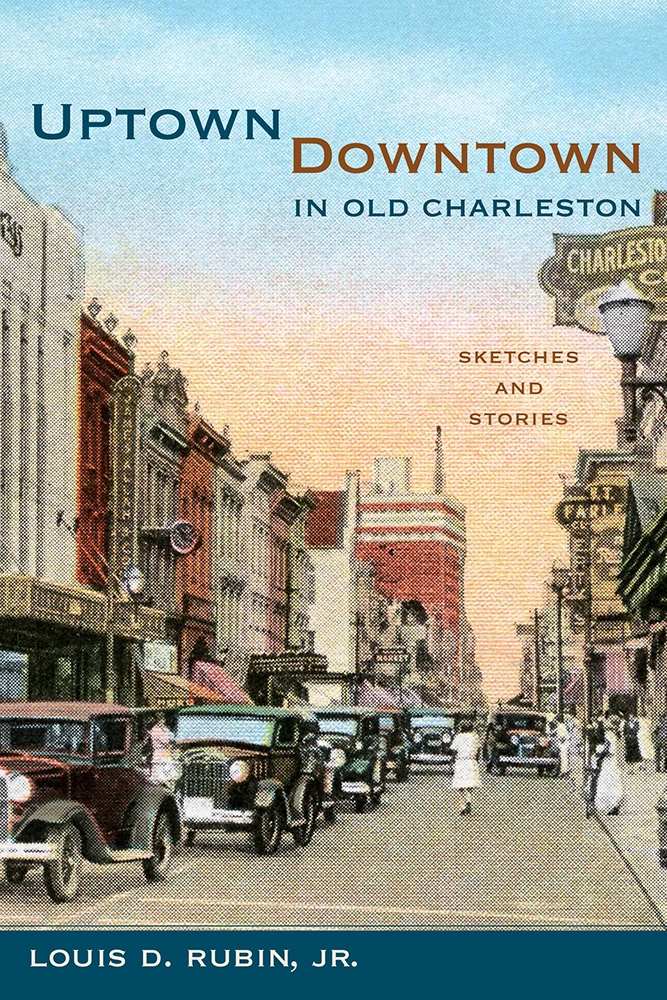 Growing up in Charleston in the 1930s and 1940s, accomplished storyteller Louis Rubin witnessed firsthand the subtle gradations of caste and class among neighborhoods, from south of Broad Street where established families, ancestral glories, and traditional mores held sway, to the various enclaves of Uptown in which middle-class and blue-collar families went about their own diverse lives and routines. Changing circumstances within his own family impelled his absorption in what seemed to be two separate worlds, and granted him a remarkable perspective into Charleston's evolving identity as an historic seaport on the cusp of modernity during the Great Depression and the onset of World War II.

In Uptown/Downtown in Old Charleston, Rubin draws on equal parts autobiography and imagination in a series of kinetic episodes that capture the atmosphere of the Holy City during this era when the population had not yet swelled above sixty-five thousand, when oldtimers still spoke with awe of the 1886 earthquake, and when the coming social and economic revolutions that shaped the latter half of the twentieth century had not yet found a toehold in the old city. Rubin's wide-eyed narrator is an earnest and observant guide, who ably takes readers on excursions to and through recognizable landmarks, including Adger's Wharf, the Battery, Union Terminal, the shops of King Street, the High School of Charleston, the Majestic Theater, and the College of Charleston. With youthful glee he atches the barges and shrimp trawlers along the waterfront, rides streetcars down Rutledge Avenue and trains to Savannah and Richmond, paddles the Ashley River in a leaky homemade boat, pitches left-handed for the youngest team in the Twilight Baseball League, ponders the curious chanting coming from the Jewish Community Center, and catches magical glimpses of the Morris Island lighthouse from atop the Folly Beach Ferris wheel. His fascination with the gas-electric Boll Weevil train epitomizes his appreciation for the freedom of movement between the worlds of Uptown and Downtown that defines his youth in Charleston.

This too is the story of a young writer finding the skills, subjects, and ambitions that will later define his career. Whether recounting the banter of a panel of Charleston authors speaking at his school or his first days as a cub reporter, Rubin's narrator captures the moments and influences that conspire to make a professional wordsmith of him. The collection ends with a homecoming to Charleston by our narrator, then a young man in his early twenties, as his inbound train is greeted by familiar vistas of the city as well as by views he had never encountered before. This is the city Rubin called home, where surprising discoveries were to be found both in the burgeoning newness of Uptown and the storied legacies of Downtown.


Louis D. Rubin, Jr., has been an author, an editor, a publisher, an artist, a newspaperman, and a university professor during his distinguished career. Rubin has served as chancellor of the Fellowship of Southern Writers, president of the Society for the Study of Southern Literature, and chairman of the American Literature Section of the Modern Language Association. Cofounder of Algonquin Books of Chapel Hill, he has written and edited more than fifty books, including most recently The Summer the Archduke Died: Essays on Wars and Warriors, Where the Southern Cross the Yellow Dog: On Writers and Writing, and My Father's People: A Family of Southern Jews. He lives near Pittsboro, North Carolina.

"Proud of its impeccable pedigrees and beautiful old houses, Charleston might lure any native boy into its snobbish spell, but Louis Rubin was drawn to another Charleston and a different vision. He preferred the docks to the yacht club basin. He loved baseball, not golf. He admired not the sleek passenger locomotives, but the Doodle Bug, a little train toodling through on its way to Savannah. Out of such young choices there grew a fine writer and a great American critic. The reader will discover Rubin's Charleston in this book."—Elizabeth Spencer

"Uptown/Downtown in Old Charleston is about a city in some ways larger that the state in which it resides. The book is also about memory and boyhood and baseball and boats and trains and family—and it packs a great wallop because it's written by one of the country's finest writers. These nine stories are among the best nine innings of history you'll ever read."—Clyde Edgerton

"Louis Rubin brings the city to life with his insider guide to a secret Charleston too often overlooked in the carriage tours and guidebooks of today. Rubin allows you to enter the soul of the real Charleston, revealing its essence and depth. A wonderful, necessary book."—Pat Conroy, author of South of Broad

"Wisdom and humor abound in this trustworthy guide to a lost world. Exquisite, deeply felt writing illuminates the well-lived life of a well-loved manand it ain't over till it's over, either! Here's a fine companion for the journey"—Lee Smith