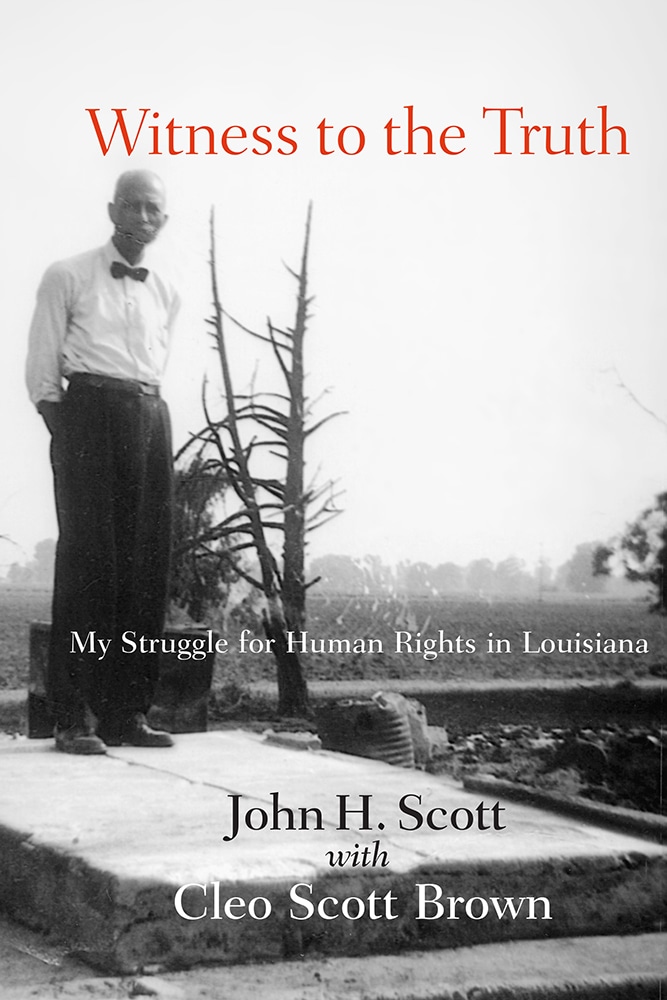 Witness to the Truth

Witness to the Truth tells the extraordinary life story of a grassroots human rights leader and his courageous campaign to win the right to vote for the African Americans of Lake Providence, Louisiana. Born in 1901 in a small, almost all-black parish, John H. Scott grew up in a community where black businesses, schools, and neighborhoods thrived in isolation from the white population. The settlement appeared self-sufficient and independent—but all was not as it seemed. From Reconstruction until the 1960s, African Americans still were not allowed to register and vote. Scott, a minister and farmer, proceeded to redress this inequality. Ultimately convincing Attorney General Robert Kennedy to participate in his crusade, Scott led a twenty-five year struggle that graphically illustrates how persistent efforts by local citizens translated into a national movement.

Told in Scott's own words, Witness to the Truth recounts the complex tyranny of southern race relations in Louisiana. Raised by grandparents who lived during slavery, Scott grew up learning about the horrors of that institution, and he himself experienced the injustices of Jim Crow laws. Without bitterness or anger, he chronicles almost one hundred years of life in the parish, including migrations between the two world wars, the displacement of African American farmers during the New Deal, and the shocking methods white southerners used to keep African Americans under economic domination and away from the polls. Chapter president of the National Association for the Advancement of Colored People for more than thirty years and a recipient of the A. P. Tureaud Citizens Award, Scott embodied the persistence, strength, and raw courage required of African American leaders in the rural South, particularly in the 1950s and 1960s. His story illustrates the contributions of local NAACP leaders in advancing the human rights movement.

Cleo Scott Brown, Scott's daughter, draws on oral history interviews with her father conducted by historian Joseph Logsdon as the basis for the book. She also uses personal papers, court transcripts, records of the East Carroll chapter of the NAACP, interviews with other East Carroll residents, family recollections, and her own conversations with her father to complete the biography.


Cleo Scott Brown worked for six years to gather and present the story told in Witness to the Truth. A graduate of Grambling State University in Grambling, Louisiana, she also attended Ball State University in Muncie, Indiana. Brown is employed as a risk manager for a public utility company and serves on the board of the J. H. Scott Memorial Fund, which provides scholarships to students who live in impoverished areas of northeast Louisiana. Brown now lives in Goose Creek, South Carolina.

Cleo Scott Brown has provided scholars, historians, and others interested in the civil rights movement a wonderful account of her father's grassroots leadership. By publishing this wonderful, insightful, and timely story, Brown shows us how Scott, who suffered the indignities of racism and the terror of white oppression, fought to win voting rights for African Americans in Louisiana and challenged and overcame an oppressive system that sought to make African Americans permanent second class citizens. Spanning over 100 years, Scott's story is a very important epic in the historiography of the American civil rights movement.W. Marvin Dulaney, executive director, Avery Research Center, College of Charleston

Witness to the Truth is a spellbinding, autobiographical account of John Henry Scott's involvement in the civil rights struggle. It documents America's history in important new ways, providing facts and lessons unknown to current generations. The heroism of thousands who are not remembered energized the movement—people like Scott, Francis Joseph Atlas, and others in this book. Nationally famous civil rights leaders did much, but they are symbolic surrogates for this vast army of unsung heroes whose families suffered constant peril.Frank M. Dunbaugh, former lead attorney for voting rights in Louisiana, U.S. Department of Justice

"Witness to the Truth is a tremendously vibrant book that provides the reader with an intimate glimpse into the life of Rev. John Scott. It is a major contribution to the increasing body of literature on local civil rights leaders and struggles and should be required reading for people who cherish the achievements of the past and want to prepare for an even better future."—Journal of African American History

"This story is a sterling example of the power of an individual voice raised in protest, of what happens when one person unwaveringly insists on what is right and just."—New Orleans Times-Picayune

"A spellbinding memoir. . . . This book is so well-written as told through the voice of Scott that it is difficult to put down."—Charleston Post and Courier