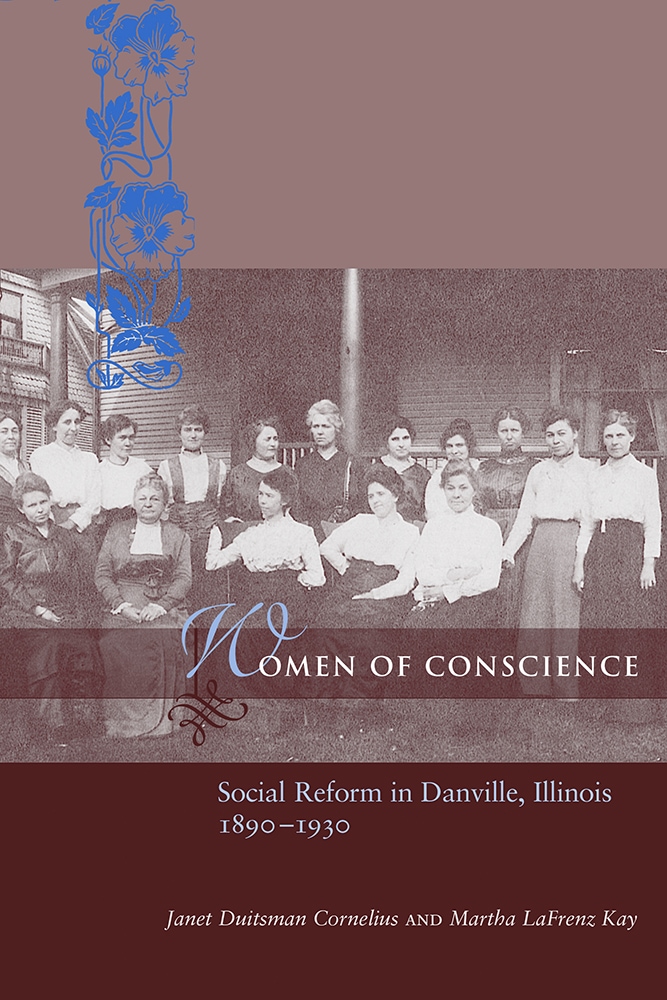 A case study in the evolution and influence of women's groups as they moved from the private to public spheres, Women of Conscience documents the means by which church groups, literary study groups, and benevolent societies empowered women in a small city to enact progressive community reforms and achieve suffrage. In their appraisal of the efforts and actions of the clubwomen of Danville, Illinois, Janet Duitsman Cornelius and Martha LaFrenz Kay illustrate the power of women united in purpose to redress societal shortcomings and amend social injustices.

Situated on the Vermilion River and linked by rail to Chicago, St. Louis, and Indianapolis, the city of Danville faced the typical stresses of modernization and population growth that affected many moderately sized cities at the end of the nineteenth century. Moving beyond the safe confines of church organizations and reading groups, women's clubs of Danville championed improvements to public health and the welfare of women, children, and the poor in their increasingly industrialized environs. Changes in labor and population in the early twentieth century brought with them racially charged lynchings and outbreaks of mob violence as well as illegal gambling and a growing sex industry, all of which turned Danville into a veritable Sin City rife with corruption and ripe for reform. These circumstances further unified and energized reform-minded women's groups eager to redeem their home through outspoken calls for morality and reason. The self-confidence, sisterhood, and oratory and leadership skills that blossomed from these social crusades were also tested in movements for temperance and suffrage.

Cornelius and Kay have adroitly mined municipal records, newspapers, magazines, and commercial statistics to create robust and fully realized portraits of specific clubs and leaders in Danville, capturing the heartfelt zeal and earnest ambitions of these inspiring women and evoking the spirit that motivated many other advocates of progressive social reforms during this transitional period in American life.


Janet Duitsman Cornelius is retired from the history faculty at Danville Area Community College and is an adjunct professor at Eastern Illinois University. She is the author of "When I Can Read My Title Clear": Literacy, Slavery, and Religion in the Antebellum South and Slave Missions and the Black Church in the Antebellum South.

Martha LaFrenz Kay is retired from the literature and humanities faculty at Danville Area Community College.