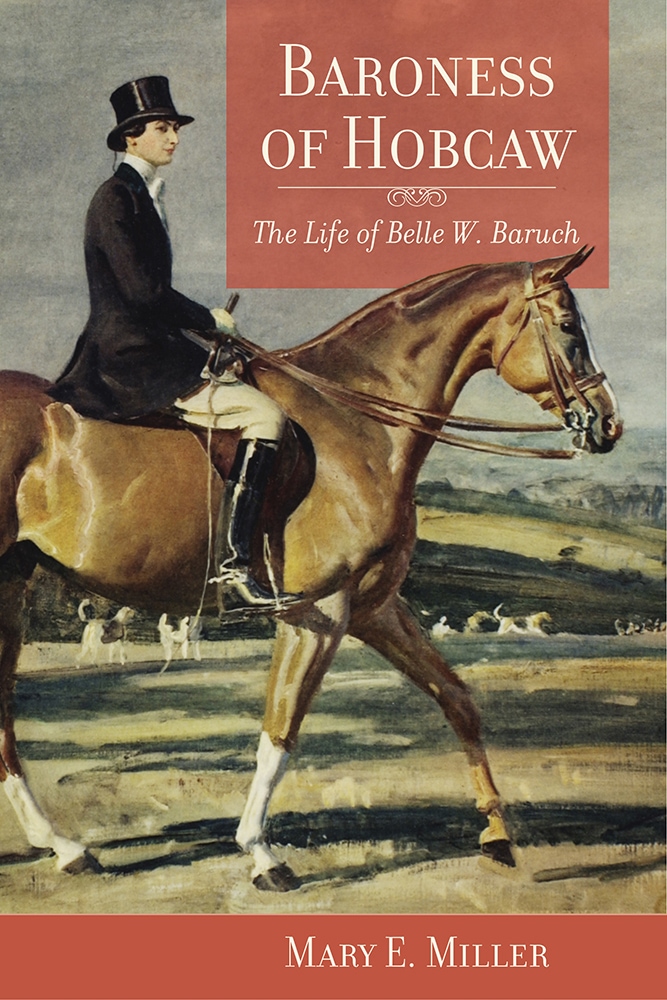 The Life of Belle W. Baruch

Belle W. Baruch (1899-1964) could outride, outshoot, outhunt, and outsail most of the young men of her elite social circle—abilities that distanced her from other debutantes of 1917. Unapologetic for her athleticism and interests in traditionally masculine pursuits, Baruch towered above male and female counterparts in height and daring. While she is known today for the wildlife conservation and biological research center on the South Carolina coast that bears her family name, Belle's story is a rich narrative about one nonconformist's ties to the land. In Baroness of Hobcaw, Mary E. Miller provides a provocative portrait of this unorthodox woman who gave a gift of monumental importance to the scientific community.

Belle's father, Bernard M. Baruch, the so-called Wolf of Wall Street, held sway over the financial and diplomatic world of the early twentieth century and served as an adviser to seven U.S. presidents. In 1905 he bought Hobcaw Barony, a sprawling seaside retreat where he entertained the likes of Churchill and FDR. Belle's daily life at Hobcaw reflects the world of wealthy northerners, including the Vanderbilts and Luces, who bought tracts of southern acreage. Miller details Belle's exploits—fox hunting at Hobcaw, show jumping at Deauville, flying her own plane, traveling with Edith Bolling Wilson, and patrolling the South Carolina beach for spies during World War II. Belle's story also reveals her efforts to win her mother's approval and her father's attention, as well as her unraveling relationships with friends, family, employees, and lovers—both male and female. Miller describes Belle's final success in saving Hobcaw from development as the overarching triumph of a tempestuous life.

After a twenty-five-year career in journalism, Mary E. Miller left the world of magazine and newspaper writing to enter Washington Theological Union in Washington, D.C., where she earned an M.A. in pastoral studies. Miller is now a spiritual director and retreat leader who lives in Surfside Beach, South Carolina.

"Miller offers a frank look at Baruch's unconventional life, exploring her flaws and failings, but also celebrating her accomplishments and the independent spirit with which she tackled her goals. The result is a story as interesting as the life of this twentieth-century conservationist, whose love for coastal South Carolina helped preserve Hobcaw Barony near Georgetown and ensure its safe future through the Belle W. Baruch Foundation."—Charleston (S.C.) Post & Courier

"Hobcaw Barony, a priceless piece of the South Carolina coast, is preserved for all generations to come because of a fiercely independent woman who cherished the land, its heritage, and the creatures which she encountered there. . . . Miller's biography of Belle Baruch doesn't gloss over any weaknesses, yet also allows Belle's strengths to come to the fore and speak for their owner. Her portrayal of Belle leaves the reader with a feeling of sadness that Belle is no longer holding court at Bellefield, no longer someone the reader could possibly meet."—Charleston (S.C.) Mercury

"Instantly ravishing reading about a lady who probably could not be more accomplished, self-driven, and well-rounded with her global travels."—Myrtle Beach Online

"Miller introduces readers to the colorful life of Belle Baruch, an heiress, athlete, world traveler and would-be spy hunter whose greatest legacy was the bequest of her South Carolina coastal estate for conservation and research. Miller doesn't shy away from the more complex aspects of Belle's biography, offering a direct treatment of her relationships with a string of male and female lovers. The vigorous style and well-paced action carry us along for an engaging ride with a woman who embraced life with verve and vigor."—Susan Millar Williams, author of A Devil and a Good Woman, Too: The Lives of Julia Peterkin