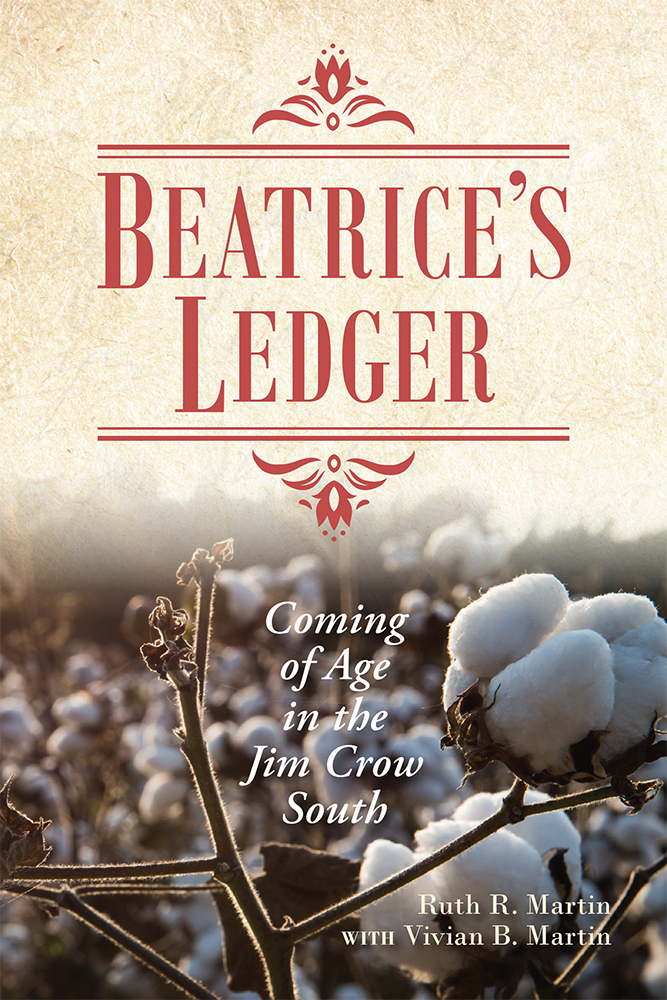 Coming of Age in the Jim Crow South

A vivid and moving story about family, courage, and the power of education

Ruth remembers the day the sheriff pulled up in front of her family's home with a white neighbor who claimed Ruth's father owed her recently deceased husband money. It was the early 1940s in Jim Crow South Carolina, and even at the age of eleven, Ruth knew a Black person's word wasn't trusted. But her father remained calm as he waited on her mother's return from the house. Ruth's mother had retrieved a gray book, which she opened and handed to the sheriff. Satisfied by what he saw, the sheriff and the woman left. Ruth didn't know what was in that book, but she knew it was important.

In Beatrice's Ledger, Ruth R. Martin brings to life the stories behind her mother's entries in that well-worn ledger, from financial transactions to important details about her family's daily struggle to survive in Smoaks, South Carolina, a small town sixty miles outside of Charleston. Once the land of plantations, slavery, and cotton, by the time Ruth was born in 1930 many of the plantations were gone but the cotton remained. Ruth's family made a living working the land, and her father owned a local grist and sawmill used by Black and white residents in the area. The family worked hard, but life was often difficult, and Ruth offers rich descriptions of the sometimes-perilous existence of a Black family living in rural South Carolina at mid-century.

But there was joy as well as hardship, and readers will be drawn into the story of life in Smoaks. Enriched with public records research and interviews with friends and family still living in Smoaks, Martin weaves history, humor, and family lore into a compelling narrative about coming of age as a Black woman in the Jim Crow South. Martin recounts her journey from Smoaks to Tuskegee Institute and beyond. It is a story about the power of family; about the importance of the people we meet along the way; and about the place we call home.


Ruth R. Martin is professor emerita and former associate dean of the School of Social Work at the University of Connecticut.

Vivian B. Martin is professor and chair of the Journalism Department at Central Connecticut State University.

"Too often our stories about Black America, and the Black South in particular, focus on slavery, segregation, and post–civil rights politics. In Beatrice's Ledger, Ruth R. Martin chronicles the beautiful, complex, and steadfast Black living that has happened between and beyond those moments in our history. Her portrait of Smoaks, South Carolina, recalls Zora Neale Hurston's Eatonville in Their Eyes Were Watching God for its description of memorable characters and cultural rituals, of enduring communal connection to the land and spirit. And like Hurston's classic, Beatrice's Ledger gives us a heroine whose journey from the South Carolina Lowcountry to points all around the world inspires our own quests for self-discovery and a sense of home."—Angela Ards, author of Words of Witness: Black Women's Autobiography in the Post-Brown Era

"The spunky daughter of a hard-working family, Martin offers a lyrical accounting of everyday life in the rural South of the mid-twentieth century, including the fraught intimacies and etiquette of racial interaction. Her memoir is a valuable addition to the first-person record of Black resilience and achievement during the Jim Crow years."—Jennifer Ritterhouse, author of Growing Up Jim Crow: How Black and White Southern Children Learned Race

"Beatrice's Ledger is a gift to historians and general readers who yearn for a firsthand account of the Lowcountry during a time that is now remote and yet exists within the framework of the lived experience of someone still with us. It is a pleasure to read and the place—and its citizens—truly come alive in Martin's careful reconstruction."—Rachel Devlin, author of A Girl Stands at the Door: The Generation of Young Women Who Desegregated America's Schools