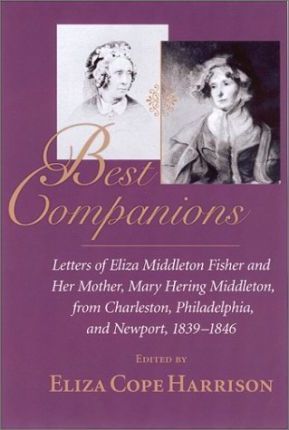 In the spring of 1839, Eliza Middleton (1815-1890), the youngest daughter of a wealthy South Carolina rice planter and diplomat, married Philadelphian Joshua Francis Fisher at Middleton Place, one of the most celebrated plantations in the South. Soon after the wedding Eliza began a new life in Philadelphia. In her first letter home, she begged her mother, "Tell me everything when you write." Thus began a seven-year conversation—on paper—between Eliza and her British-born mother, Mary Hering Middleton (1772-1850), that would encompass some 375 letters. The correspondence offers a sweeping view of antebellum Charleston, Philadelphia, and the fashionable resort of Newport, Rhode Island. The letters delineate a cultural and social life that bound together North and South at a time when sectional interests worked to sunder the nation.

These letters hold particular significance because they record the joys, sorrows, frustrations, and concerns of a mother and a daughter, and convey the opinions and actions of all their family members, including the men. Eliza and her mother chronicle issues and events ranging from mental illness to musical performances, financial panics to children's parties, pregnancy to politics. In addition they introduce a notable cast of characters, including Charles Dickens, President Van Buren, the courtly Philadelphian George Harrison, the scandalous actress Fanny Kemble Butler, the irascible diplomat Henry Middleton, the lovely Julia Ward, and the African slave who was captain of the Middletons' private schooner.

Eliza Cope Harrison, after a career teaching history in the classroom as well as through museum exhibits and programs, returned to historical research in the 1990s when she discovered the Middleton-Fisher correspondence. The editor of Philadelphia Merchant: The Diary of Thomas P. Cope, 1800–1851, Harrison lives in Lebanon, Pennsylvania.

"This collection of several hundred letters beautifully edited and contextualized by Eliza Cope Harrison, it is much more than a window on the antebellum elite as they shuttle through Philadelphia, Newport, and Charleston. These letters show a loving relationship between mother and daughter, sustained over vast distances, as the latter seeks to make sense of marriage, of her own (and inevitable) pregnancies, and of the cultural divide between North and South. The letters, too, illuminate the thoughts of people who examine the world closely because they are accustomed to having their views taken seriously. Thus the letters provide marvelous insights on modes of transportation and the appearance of the land, dating customs and practices, fashions in clothing and decoration, trends in reading and amusements, and attitudes toward slavery, religion, and abolitionism—and, of course, politics."—Mark C. Carnes, general editor of American National Biography

"Admirably researched and exquisitely edited, this correspondence moves gently above editorial notes so teeming with details that they are a counterpoint text. As for the letters themselves, they demonstrate the special talents of educated women for creating domestic cohesiveness with informative and entertaining language."—Joanne Trautmann Banks, Co-editor, The Letters of Virginia Woolf

"Out of her mother's desk drawer, Eliza Cope Harrison has uncovered a lively and engrossing set of letters. Readers will find rich commentary on travel, sectional differences, slavery, politics, music, childbirth, mothers and daughters, friendship, and marriage. Harrison shows the Middleton women to be deeply involved not only in their homes and families but also in 'spheres' deemed male terrain. These letters reward multiple readings—by scholars, students, and those curious about everyday life in nineteenth-century America."—Kirsten Swinth, Professor of History, Fordham University

"No single volume better captures the intricacies of North-South and mother-daughter relations or the dynamics of family life among elite Americans a generation before the Civil War. Lovers of Philadelphia, Charleston, and Newport will find Best Companions superbly rewarding. The editing is deft and helpful, careful and sensible, not obtrusive. On page after page, incidental observations and the play of feelings and minds will delight the reader."—David Moltke-Hansen, President, The Historical Society of Pennsylvania