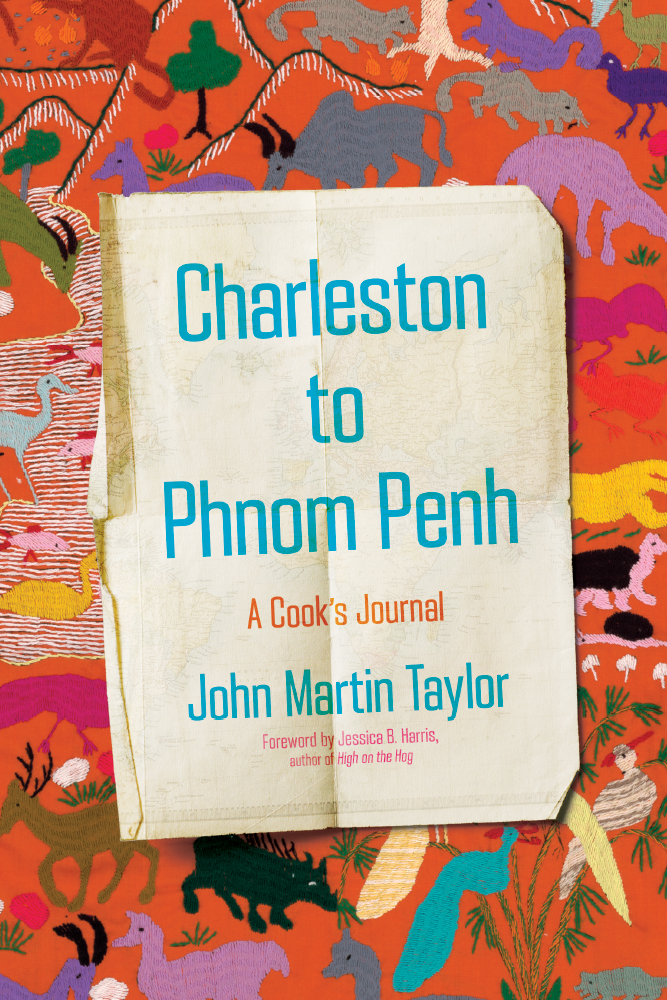 A journey through the lands of boiled peanuts, pesto, and pickled peppercorns—with thirty recipes

Foodies, travel enthusiasts, culinary historians, fans of fine writing, and cookbook collectors will feast on John Martin Taylor's Charleston to Phnom Penh. A unique vision of a joyous and peripatetic life, these essays take readers on a journey across three continents, from the South Carolina Lowcountry of Taylor's upbringing to the Caribbean, Italy, France, Eastern Europe, and Asia.

Taylor recalls his mother's before-her-time culinary experiments; probes historical archives to research the origins of classic dishes; and remembers adventures sailing, dancing, and fishing, as well as cooking. His gaze is social, etymological, personal, comic, and historical, and all foods are considered fair game for scrutiny. Taylor tells us how to bake with olive oil, why he doesn't make wedding cakes, what to do in Transylvania, and how he came to be a voice of the Lowcountry. Make a margarita and delve into his deconstruction of hoppin' john, his erstwhile namesake; the history of cheese straws; and how to make callaloo and fish amok.


John Martin Taylor is a culinary historian and cookbook author. His first book, Hoppin' John's Lowcountry Cooking, has been continuously in print for thirty years, and his writing has appeared in publications including the New York Times, Washington Post, and Gastronomica.

"After flipping through a few pages, you will see why John Martin Taylor is one of my biggest heroes. His contribution to Southern food is unmatched. Keep flipping through these pages and you'll see why."—Sean Brock, author of cookbooks Heritage and SOUTH, and featured chef on the Netflix Chef's Table series

"John Martin Taylor embodies himself in landscapes and absorbs water, air, earth and spirit. This project, bridging his journeys southeast of America and Asia, with stops in Italy, Romania, China, and the Caribbean in between exposes a culinary dialogue of an artist with his art we are privileged to be a part of. This collection is magical."—Michael W. Twitty, author of The Cooking Gene and Koshersoul

"I had the good fortune to meet the inimitable John Martin Taylor at his Charleston bookshop years ago while I was a young newspaper food writer full of questions and his grand epicurean journey had already begun. This Lowcountry man who was born in Louisiana has been on the move all his life, and now, finally, we can find out where he's been. And meet his grandmother who showed him how to dry green summer apples on a window screen and learn the secret to his mother-in-law's chocolate chip cookies. And see how to make pesto like they do in Genoa and understand why he doesn't want to make wedding cake anymore, no matter how good of friends you are. (It has something to do with summer heat, a broken air conditioner, and vodka.) This bright, witty, globe-trotting epicure has just shared it all, and we better pull up a chair and listen."—Anne Byrn, author of American Cake, The Cake Mix Doctor, and Between the Layers newsletter on Substack

"John Taylor is what I would call a natural cook. We go back almost 50 years, and I've never known him to cook without dancing at the same time! Our band—The B52s—used to go over to his little house in Athens, Ga. On a hot summer afternoon where he could always be found playing music and making cornbread, we'd all dance around the table and wait for the gold to come out of the oven! [Charleston to Phnom]—rich in recipes, culinary history, travel, and general joie de vivre—will have you dancing around the kitchen table hungry for more!"—Kate Pierson, longtime friend of "JT," founding member of The B-52s

"John Martin Taylor, or "Hoppin' John," has done it again. His laser-like vision brings to life decades of insightful and scholarly work encompassing his vast knowledge of culinary history and classic European cooking. His Southern voice enchants us with vivid memories from long ago — dancing the Shag; preparing minestrone outside Genoa; and to-the-minute details of Lowcountry shrimp and grits. In Charleston to Phnom Penh: A Cook's Journal, he shares the lifetime of a man who has enjoyed life to the fullest. His brilliance edits out the mediocre, focusing instead on the beauty of a dish like Peaches Aswim in Rose Petals, 2008, a recipe from the sister-in-law of my mentor Richard Olney. John, like Richard, is an artist who, in lieu of painting, makes his mark with some of the greatest food writing and editing from the 20th century."—Frank Stitt, chef and owner of Highlands Bar and Grill, Bottega, and Chez Fonfon

"How lucky we are to have John Martin Taylor's collected works! These essays are filled with exuberance, wit, and erudition, at turns poignant and funny. Charleston to Phnom Penh captures a life rich in food, friendship, and art. Equal parts scholarship, memoir, travelogue, culinary companion, and language lesson, this is truly a book to savor."—Darra Goldstein, food historian and founding editor of Gastronomica

"A legendary writer and cook, John M. Taylor is one of the finest culinary and historical treasures of his generation. Two of my first cookbooks, The New Southern Cook and Hoppin' John's Lowcountry Cooking, are still some of my favorites and quite worn with use. Anyone can cook Southern if they follow along with this master of the craft!"—Tank Jackson, hog farmer and owner of Holy City Hogs

"I have known John Taylor since we met in Paris 40 years ago. His friendship was the key to an amazingly rich new world. Not only is he a wonderful cook, someone who cooks with his soul, with all his life history, but he's a passionate scholar of everything we ingest. This truly marvelous book encapsulates all this and more. It's a declaration of love to life."—Jean-Sébastien Stehli, associate managing editor of Madame Figaro

"What a pleasure, what a treasure—John Taylor's culinary musings all pulled together in one fascinating volume. I especially loved the beginning chapters with such hauntingly delicious memories of his early years, in the South and many other parts of the world. In a word: Delightful!"—Nancy Jenkins, food historian and journalist, author of Virgin Territory

"You are about to make a friend. Meet John Martin Taylor, also known as Hoppin' John, also known as Bubba to a very select few among whom I number myself. In these pages he invites you to sit with him for a while. If you do, I can guarantee that he will dazzle you with his erudition, astonish you with knowledge garnered in his travels, and delight you with his sense of humor that will have you at times laughing out loud. . . . The tales that are told are an exuberant love letter to a life well lived: a life that is savored daily—one seasoned with thought, simmered with humor, and served up with JOY."—From the foreword by Jessica B. Harris, PhD, culinary historian, and author of High on the Hog: A Culinary Journey from Africa to America