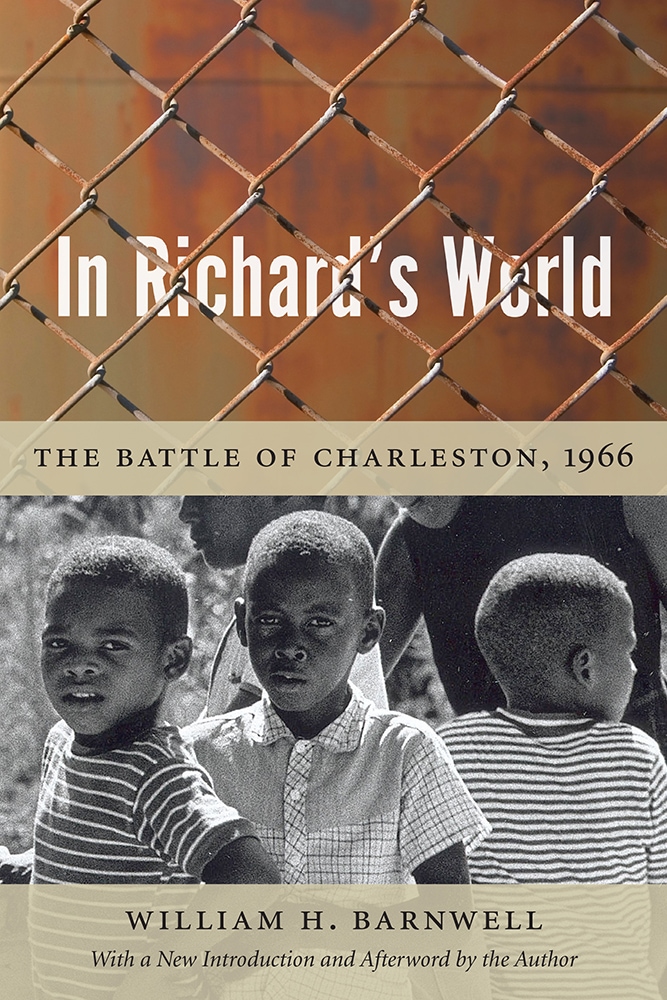 The Battle of Charleston, 1966

In 1966, as a seminarian at the Virginia Theological Seminary, William H. Barnwell undertook a summer's missionary work at St. John's Episcopal Mission Center in his native city of Charleston, South Carolina. His supervisor was an African American priest, and Barnwell's duties ran the gamut from managing the recreation room to crisis intervention among the mission's clients and neighbors. In Richard's World is based on letters and journal entries that Barnwell kept throughout 1966, a year of social upheaval and civil rights unrest in Charleston. It was during this time that Barnwell encountered the "Battle of Charleston" within himself. His activist education began during that summer as he moved culturally and politically between white and black communities on the Charleston peninsula and served in a church known more for its members' elite pedigrees than for social action.

This Southern Classics edition includes a new introduction by the author that is part autobiography and part survey of the successes and failures of the civil rights movement in lowcountry South Carolina since In Richard's World was first published.

William Barnwell grew up in Charleston, South Carolina, graduated from the University of the South at Sewanee, Tennessee; served as an officer in the U.S. Coast Guard; and graduated from Virginia Theological Seminary. He has been a pastor at churches in Conway and Columbia, South Carolina; New Orleans; and Boston; and he served at the Washington National Cathedral as the canon missioner. In 2008 he and his wife, Corinne, returned to New Orleans, where he manages a national Episcopal Church program, the Disciples of Christ in Community (DOCC), and serves in prison ministry and at various churches. His other books include Our Story According to St. Mark and Lead Me On, Let Me Stand: A Clergyman's Story in White and Black.

"An affectingly candid depiction of conflict and growth, the confrontation within one person of two worlds that should gain sympathy not only for the author but for his South."—Kirkus Reviews

"The best of the book is found in William's exceptional honesty."—New York Times Book Review

"An unusual, personal, and deeply emotional book on black and white [relations] in the South."—Publishers Weekly

"This is a remarkably candid story of what the author saw and thought and felt and what response he received from his many friends and relatives in the exclusive section of the city below Broad Street. It is a book that will be considered controversial, for the author, a descendant of many of the oldest and most distinguished families of the Carolina Lowcountry, makes no attempt to hide his feelings as he struggles to work in the slums from 9 a.m. to 5 p.m. each day and then drives home, not too many blocks, to the comfort and prosperity of the genteel world of old Charleston."—Charleston (S.C.) News and Courier

"William Barnwell's first book, In Richard's World, changed my life. It was the main reason I applied to teach at an all-black school on Daufuskie Island. That experience became the basis for my book The Water Is Wide. Barnwell is a shameless white, southern liberal just like me. We are a small, but stubborn group and we are joined by the likes of Jimmy Carter, Bill Clinton, and Sister Helen Prejean. I think William Barnwell has lived a stirring, exemplary life—and he writes beautifully."—Pat Conroy