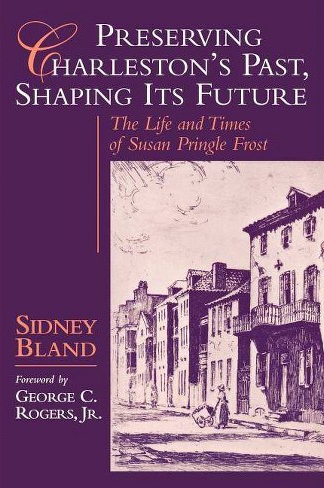 Preserving Charleston's Past, Shaping Its Future

The Life and Times of Susan Pringle Frost

One of the most remarkable women born in the Reconstruction South, Susan Pringle Frost was an outspoken champion of a host of important causes, including women's rights, a more active and accountable local government, and better treatment of African Americans. In his biography of this dynamic Charlestonian, Sidney Bland enumerates Frost's many accomplishments and chronicles what he considers to be her greatest achievement—spearheading a historic preservation movement in Charleston that became the model for preservationists throughout the country.

Bland recounts Frost's early life as a member of an illustrious Charleston family and her entrance into the workplace, caused partly by her father's financial failures. He tells how she defied convention by establishing a real estate office in Charleston's all-male professional district, sparked an interest in preservation by buying and renovating houses on and around Charleston's oldest thoroughfare, and founded the Society for the Preservation of Old Dwellings, one of the nation's oldest historic preservation groups and the forerunner of the Preservation Society of Charleston. Offering vivid insight into the courage, perseverance, and eccentricity of a woman he considers a complex and often inconsistent crusader, he credits Frost with garnering support for the city's landmark Historic District Zoning Ordinance and traces specific staples of present-day historic preservation methods to her visionary initiatives.


Sidney Bland is a professor of history and cochair of American studies at James Madison University in Harrisonburg, Virginia. Bland has published articles in South Carolina Historical Magazine, Historic Preservation, Furman Studies, and the Journal of Long Island History.