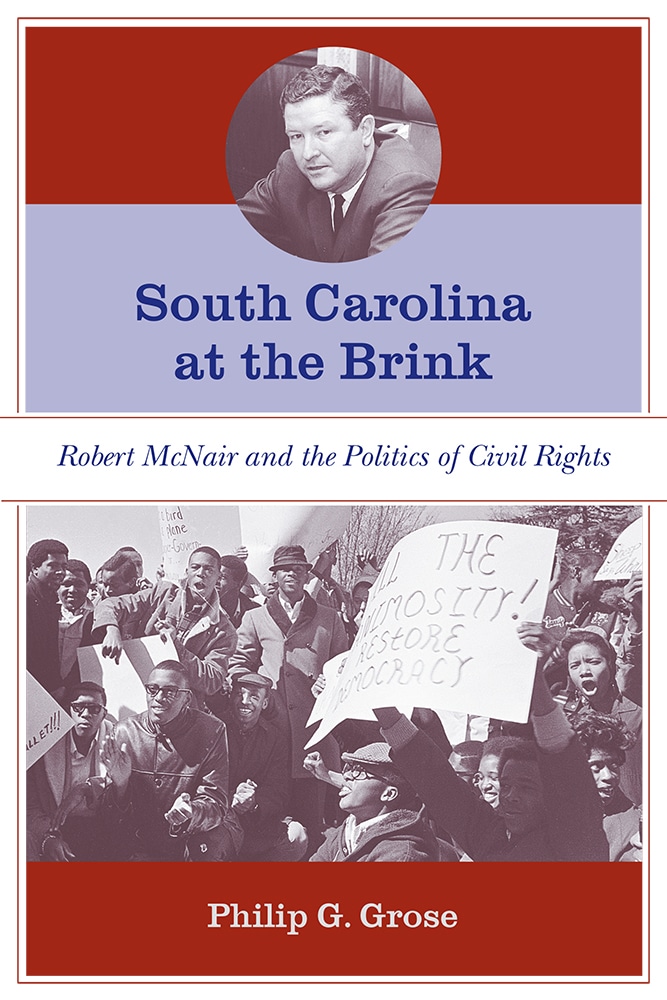 South Carolina at the Brink

Robert McNair and the Politics of Civil Rights

As the governor of South Carolina during the height of the civil rights movement, Robert E. McNair faced the task of leading the state through the dismantling of its pervasive Jim Crow culture. Despite the obstacles, McNair was able to navigate a moderate course away from a past dominated by an old-guard oligarchy toward a more pragmatic, inclusive, and prosperous era. South Carolina at the Brink is the first biography of this remarkable statesman as well as a history of the tumultuous times in which he governed.

In telling McNair's story, Philip G. Grose recounts historic moments of epic turbulence, chronicles the development of the man himself, and maps the course of action that defined his leadership. A native of Berkeley County's "Hell Hole Swamp," McNair was a decorated naval commander in the Philippines during World War II and then a small-town attorney, a state legislator, and lieutenant governor before serving in the state's highest office from 1965 to 1971. Each role taught him the value of tolerance and perseverance and informed the choices he made at the helm of state government.

McNair's administration will be remembered for its management of episodes of violence and conflict that marked the onset of desegregation and of protest against the war in Vietnam: the tragic shootings in Orangeburg in February 1968, the 113-day strike at the Medical College in Charleston in 1969, violence at high schools in Columbia and Lamar in 1970, and antiwar protests on the University of South Carolina campus in 1970. These events remain the most vivid memories of the period, but McNair's lasting legacy is his remarkable ability to affect peaceful solutions and, ultimately, compliance with federal court rulings.

Grose contends that it was McNair's decisive actions and reactions to crises that steered South Carolina clear of much of the ongoing strife of neighboring states during this period and allowed the governor to achieve much improvement to the condition of the state's education system and economy. Grose's narrative draws from an extensive oral history project on the McNair administration conducted by the University of South Carolina and the South Carolina Department of Archives and History as well as recent interviews with key participants.


A veteran newsman, Philip G. Grose (1938–2012) served on the staffs of South Carolina governors Robert E. McNair and John C. West and held a number of leadership posts in state government. He was a senior consultant to the Executive Institute of the state's Budget and Control Board and a research fellow at the Institute for Southern Studies at the University of South Carolina