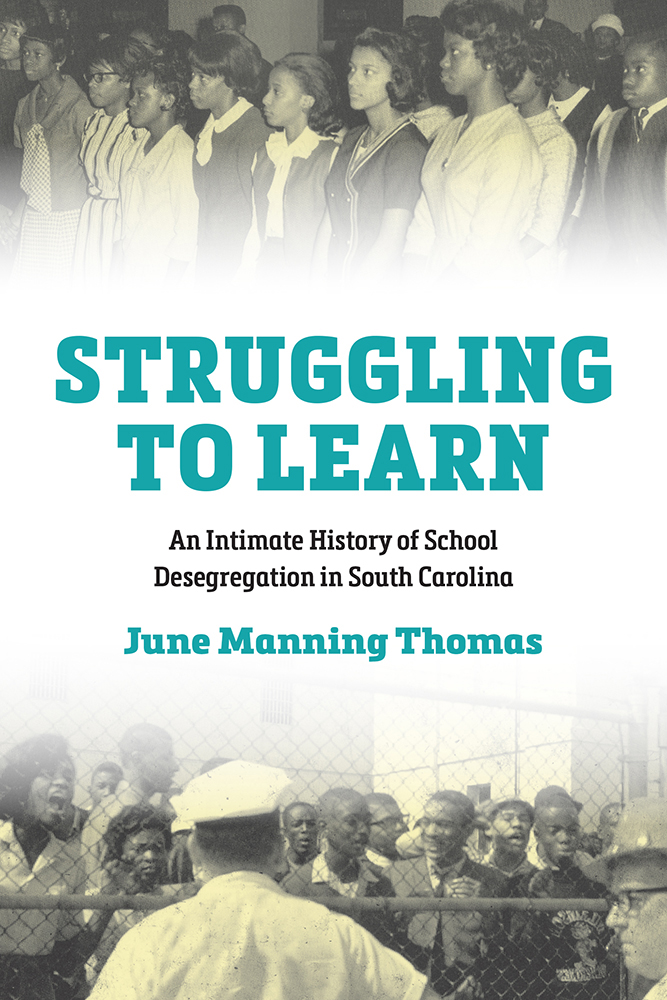 An Intimate History of School Desegregation in South Carolina

The battle for equality in education during the civil rights era came at a cost to Black Americans on the frontlines. In 1964 when fourteen-year-old June Manning Thomas walked into Orangeburg High School as one of thirteen Black students selected to integrate the all-White school, her classmates mocked, shunned, and yelled racial epithets at her. The trauma she experienced made her wonder if the slow-moving progress was worth the emotional sacrifice. In Struggling to Learn, Thomas, revisits her life growing up in the midst of the civil rights movement before, during, and after desegregation and offers an intimate look at what she and other members of her community endured as they worked to achieve equality for Black students in K-12 schools and higher education.

Through poignant personal narrative, supported by meticulous research, Thomas retraces the history of Black education in South Carolina from the post-Civil War era to the present. Focusing largely on events that took place in Orangeburg, South Carolina, during the 1950s and 1960s, Thomas reveals how local leaders, educators, parents, and the NAACP joined forces to improve the quality of education for Black children in the face of resistance from White South Carolinians. Thomas's experiences and the efforts of local activists offer relevant insight because Orangeburg was home to two Black colleges—South Carolina State University and Claflin University—that cultivated a community of highly educated and engaged Black citizens.

With help from the NAACP, residents filed several lawsuits to push for equality. In the notable Briggs v. Elliott, Black parents in neighboring Clarendon County sued the school board to challenge segregation after the county ignored their petitions requesting a school bus for their children. That court case became one of five that led to Brown v. Board of Education and the landmark 1954 decision that declared school segregation illegal. Despite the ruling, South Carolina officials did not integrate any public schools until 1963 and the majority of them refused to admit Black students until subsequent court cases, and ultimately the intervention of the federal government, forced all schools to start desegregating in the fall of 1970.

In Struggling to Learn, Thomas reflects on the educational gains made by Black South Carolinians during the Jim Crow and civil rights eras, how they were achieved, and why Black people persisted despite opposition and hostility from White citizens. In the final chapters, she explores the current state of education for Black children and young adults in South Carolina and assesses what has been improved and learned through this collective struggle.


June Manning Thomas is the Mary Frances Berry Distinguished University Professor Emerita of Urban Planning at the University of Michigan. She is the author of Planned Progress: Lessons from Shoghi Effendi and Redevelopment and Race: Planning a Finer City in Postwar Detroit, and co-editor of The City After Abandonment.

"This book tells a fascinating, powerful story about race, education, and civil rights in South Carolina that illuminates contemporary American predicaments. Combining memoir and history, June Manning Thomas shows how segregation has affected Black people educationally, socially, and emotionally. This examination of the past casts useful light on the moral and political conditions for moving our society toward a more democratic future."—Howell Baum, author of Brown and Baltimore: School Desegregation and the Limits of Liberalism

"By telling her story in the larger context of Southern Racism, vitriolic resistance for anything challenging the status quo, and the structural assault on human and familial dignity and integrity, Dr. Thomas sets up the heroic story of the battle against these forces, and the deep wounds and traumas that still call out to be healed."—Hoda Mahmoudi, Bahá'í Chair for World Peace, University of Maryland

"This book is a unique synthesis of deep historical research with a searing personal memoir that gets us closer to the heroic struggle for school integration in the South than any other book I know. The distinguished planner and educator June Manning Thomas sets her own experience as one of the first to integrate her South Carolina high school in the context of the moral strength of the Black community that nurtured her. This is a story of hate and love, and above all an American story of a community and an individual who stood up to violence and persecution to pursue the dream of equal educational opportunity."—Robert Fishman, University of Michigan

"Struggling to Learn is a deeply moving, meticulously researched, and much needed memoir. An accomplished scholar, June Manning Thomas shares her personal journey and illuminates the resilient determination of African Americans in South Carolina and the nation as they battled injustice and engaged in the long struggle for equal education."—Bobby Donaldson, University of South Carolina